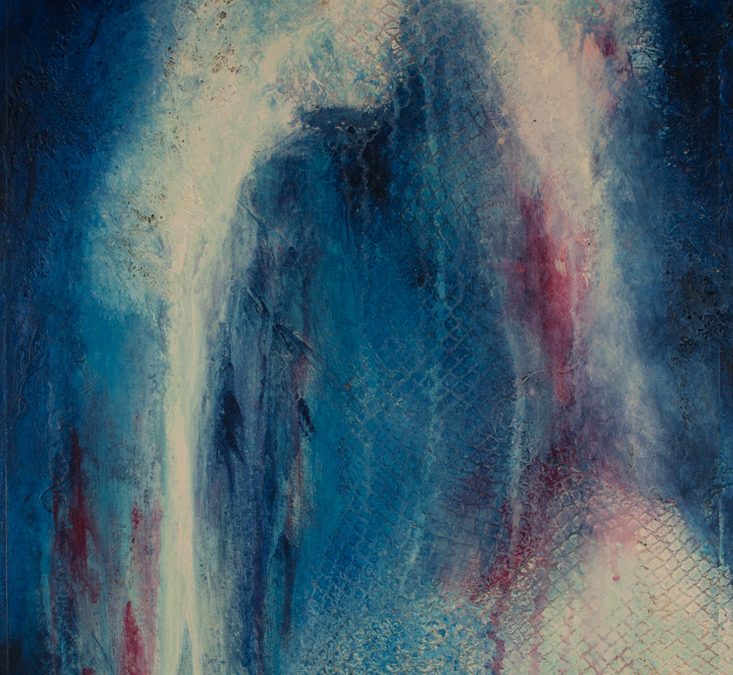 Quiet Persistence, what is it? To persist is to continue steadfastly or firmly in some state, purpose, course of actions, especially in spite of opposition. To last or endure tenaciously.

I have lived a life of quiet persistence. A revelation that is just beginning to surface largely because of the shadow work I have been doing through writing, my work in the art studio and witnessing my daughter’s recovery.

Quiet persistence is a way of being that stems from my extraordinary sensitive nature and timid behavior in most social situations. According to some, I have been stoic or aloof when among a larger group of acquaintances.

The reality, stoicism is me observing and absorbing everything around me. Unfortunately, to the point where my senses become overwhelmed. This is where I begin retreating into that internal cave of self-comfort. I do it less now, but the overwhelm still emerges, sometimes without warning, other times self inflicted.

My stoic nature has lead me to be present and do so without making a lot of commotion. Being in control of my emotions while in the presence of others allows me to observe on my own terms and with quiet persistence.

I have always had a general distrust of people which began early on when faced with ridicule and rejection for things I said or did. Minor trauma in the adult world, but major for a young child.

A prime example was doodling during math or daydreaming in science. Doodling and daydreaming were my way of processing information through my imagination. A revelation no one understood in the 60″s, not even me. Time in the corner, a slap on the hand or a pinch on the shoulder. I experienced public shame.

These behaviors felt natural to me. But feeling rejected, I shut down and began to hide behind a cloak of shyness. My timid ways allowed me to witness the world from a perspective that could only be scrutinized by me. Growing up, I did not share most of what I thought about the world. My internal compass was guiding me instead.

I never voiced my distrust which became a vital part of my quiet persistence.

Rejections in my youth melded into a childhood belief that I had little value. I continue to carry this belief on some level. As a sensitive soul, I feel that my voice was never really heard. Not an unusual childhood belief with roots in family dynamics and being born a female. I do not blame my parents. They were young and a product of their own 1940’s and 50’s upbringing.

In the 60’s, birth control did not exist for public consumption, and thus our family expanded to four children total by the time my parents were 26. I was bound to be pushed up the ladder and out of the “needing attention” dimension sooner than later.

It was not just home that I felt unheard and devalued, it was everywhere, especially school. When I was older, it was a boss, work or college mates, and other acquaintances along the way.

When you feel unheard, you feel devalued. This is not news to anyone. So many of us ask ourselves, what’s the point of it all if you cannot say what is on your mind even in an intimate situation and have someone actually listen. You seem to be just going through the motions. My belief is that a great deal of our society go through these “status quo” motions everyday. They either don’t care, don’t have time, are in denial or are just plain exhausted by it all.

We have become Twenty First Century Robots. So I quietly persist to avoid falling prey (not to say that I don’t at times)

Keeping to Myself to Protect Myself

Feeling devalued stems largely from male influences, such as teachers, relatives, boys in the neighborhood, boyfriends or bosses. There have been few males in my life that I felt or feel really listen to much of anything I have to say. I partially blame myself. Because of my extreme sensitivity, I was not a great communicator and often gave up without a fight. The mirror effect: devalue self, therefore others will devalue you.

So I gave up early on. Went along to get along (which I wrote about in a previous blog-see link below). While I worked hard to get along, my observation and interpretations of the world were forming. I kept them to myself, essentially hoarding them. Trusting no one with what I was really thinking. They would not get it. Feeling the wrath of rejection when exposing anything of importance, was not a road I wanted to travel.

Quiet persistence through self protection.

Intuition Led Me Toward Endurance

Being aware of the world beyond my years, I suffered a kind of weird self imposed silence. Intuition and empathy are a blessing and a curse for me. But whenever acting upon my intuition, I was rarely led astray.

Looking back, this is what I see as evidence of my quiet persistence.

One example was the time I walked home from kindergarten when my dad forgot to pick me up. I had never walked alone for 14 blocks before. I did not think to ask for help before setting out on my mission. Cell phones were not a thing in the 60’s. It is funny and sad that fear did not enter my mind until I peaked over the hill to my house and everyone came running at me. Their projection of fear cast a shadow within me, and that shadow was self doubt. That doubt remains, even today. But I do take solace in the fact that my five year old self began that intuitive journey through actions that felt right to me.

This would be just the beginning of my quiet persistence.

In college my desire to take a trip overseas outweighed the fact that I lost my job after I dared to ask for several weeks to travel. In addition, I never ventured outside of the United States or been away from home for more that a week. However, I knew, deep within my soul, it would change the course of my life. And it did.

In that same vein, after my spouse was offered a residency in either New Orleans or Fargo, ND, I chose the former. I suggested that it would be a great adventure. My internal need to live in a more diverse environment has always been so strong, outweighing any familial or familiar influences. Granted, I did take advantage of my spouse’s over-the-moon love for me as I quietly persisted in my quest to move. But I knew, intuitively, it was the right path. My life transformed after living in Louisiana.

Another prime example of my faithful intuition is as my daughter struggles with a substance use disorder, I choose to be there whenever she needs me. Some may call me an enabler during this journey. But, I set those naysayers aside and choose my daughter’s need for love and compassion over their unsubstantiated noise. I admit to not always listening to my gut which can and has resulted in some major and some minor mishaps. However, as she made the decision to begin her recovery journey in earnest, my heart and soul said, “Yes, come home where you are safe and can heal”.

Despite the doubters (silent and otherwise) every step of the way, I endured quietly and persistently.

Still, there are so many times I doubt myself because of the incessant pounding and irrational noise of our 24/7 society. Which continuously ring in my ears and constantly rattle my brain. There are times when my empathetic self takes precedence over my intuition. Caring more about what others think, instead of what is good for me. An outcrop of feeling devalued. I do not want to hurt the feelings of others nor do I want to feel the pain of rejection. I know I am not alone in this affliction.

It took years for me to realize that my work as an artist has immense value to me because it is who I am, not what I do. Doubt has been sitting way too comfortably in the backseat of this journey since the beginning. For years, I let my need to placate others supersede my intuitive need to express myself through art. Don’t get me wrong, I still doubt my work as an artist and whether others place value on the work itself. But I no longer doubt MYSELF as an artist and my quiet persistence to stay true to my purpose for creating.

As I get older, my intuition wins more often than not because I am learning to value my quiet persistence and ability to endure.

I chose this image because it represents the constant re-awakening of ourselves as life’s experiences weave their way throughout our journey. A soul reveals itself but is often in a state of flux or exists in the shadows, as that journey continues.

Link to Blog “Doing My Being