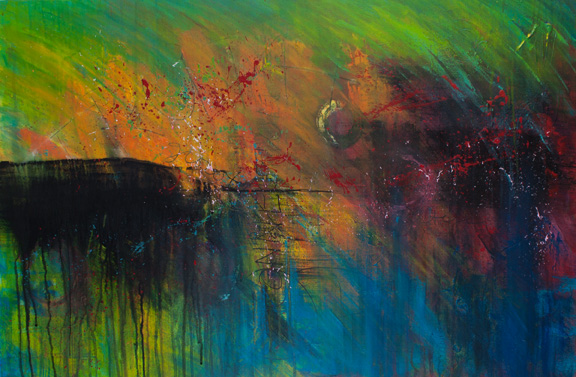 I could have filled a series of books, 1000 pages each, with all the coloring book pages I meticulously labored over as a child. As I honed my fine motor skills, there was not a millimeter of color outside of the lines. My freakish obsession of staying within the lines correlated with my need to receive praise for my preciseness and to avoid any kind of rejection from those who would scrutinize the end results.

My fragile ego could not handle any level of criticism. Staying within the confines of the HEAVY BLACK OUTLINE was a way to keep from being ridiculed or shamed. I know that seems extreme. But therein lies the childhood myth that weighed me down.

As a young child, I remember all the coloring contests kids would enter at various retail stores or restaurants. Those who received praise and prizes had perfectly rendered their subject matter, not a single mark outside of that heavy black outline. The tree tops were green, the sky blue, clouds white and the horses brown. Onlookers would commend the perceived perfection and scoff at the kids who chose vivid and unrealistic colors, filling the page with crazy marks that defied the rules of the heavy black line. Messy and uncontrolled.

My propensity to restrict my creativity in avoidance of any and all uncomfortable confrontations, did not begin or end at the coloring book outline. I addressed my rule following addiction in a previous blog “Going Along to Get Along”

My public persona was about following the rules, playing the safety and comfort cards. Instead, anxiety and physical pain were the cards I was dealt on a daily basis. Why was my head telling me one thing and my body (specifically my stomach) revealing other truths about what safety and comfort really meant? Wanting comfort and actually feeling comfort are two separate entities. One was based in reality, the other was just an abstract.

Our culture encouraged/encourages us to think with our head and discard what we feel with our hearts. Heartspeak is too complicated, mushy, weak and irrational.

Staying in my Lane

Following the rules meant staying in my lane and keeping a low profile so as not to attract attention. Standing on the sidelines was easier, less intimidating than crossing over to the other side or venturing outside the HEAVY BLACK OUTLINE that I placed strategically before me. There would be no chance of rejection or need to explain because I basically rendered myself invisible.

Staying in my lane also provided me with approval from those who had little time for uncomfortable discussions or explanations. Everyone was safe.

It was all a facade. Still is.

How this Childhood Myth Affected my Art

Being tightly wound and hiding behind the self imposed rules of the heavy black line was bound to lead to an explosion or implosion of some kind along the way.

First it came in the form of passive aggressive behaviors not always evident to the recipients. Or demonstrated through physical manifestations such as slamming doors, stomping feet, yelling done in the privacy of my childhood home which eventually spilled into my adult dwellings.

My early college work had some psychological overtones, but I used traditional subject matter to express myself such as, figurative, interior spaces and landscapes. Staying within the lines was still prevalent in the work. Although, I was inching outside the line.

Explosion Beyond the Line

When I really look back at where the explosion beyond the heavy black outline began, it seems the seed was unofficially planted when visiting New York City in the early 1990’s; specifically viewing contemporary art. Seeing and feeling the impact of a Mark Rothko, Helen Frankethaler, Clyfford Still, Joan Mitchell, Alexander Calder, Louise Bourgeois, etc. on such a large scale, blew me away. Still does.

Sure there was a great deal of external and internal influences before that time, but synchronicity came into play. I still feel a sense of wonder about how I got to this point.

Instead of mapping out a strategy for keeping within the lines, I chose a path of ebb and flow. By allowing my intuition to guide the content and even the color choices, I am giving voice to years of blind devotion to the rules of that heavy black line and denied creativity.

My subconscious is rich. I continue to create with spontaneous abandon.

I created this piece recently during a workshop called “Emotional Graffiti”, given by Amy Turner of The Courage Tribe. The piece happened in sections with each having an intention such as: what do we want to leave behind, what do we aspire to and what is beauty for us. To date, this is my most extreme movement beyond the coloring book line. I am in awe of how my intentions were brought to light.